How to do a Bike Move 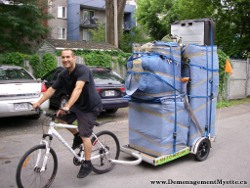 This guide is based on the expertise that we have developed during the 3000 bike moves we performed since 2008. This represents over 20 000 man-hours of experience and hundreds of tons moved by bike!

It is said that a bike can carry over ten times its own weight, and this ratio also holds true for a bike with trailer. In fact, we’ve managed to carry over 800 pounds (cyclist + payload of over 600 pounds) with an 80 pound vehicle (30 pound bicycle + 50 pound trailer). To our knowledge, there is no other means of transportation that is as effective! 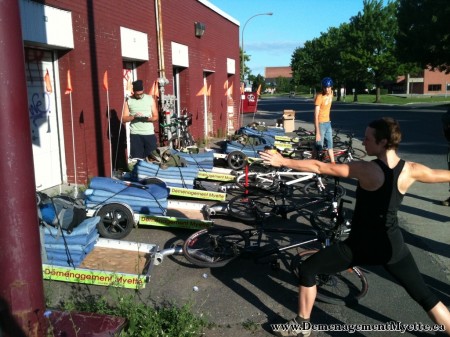 There are plenty of bike trailers out there, but most are meant for bicycle touring or toting kids around and their capacity does not generally exceed around a hundred pounds. We only know of two companies that manufacture trailers that are specially designed to carry loads of many hundreds of pounds. These are Tony’s Trailers and Bikes At Work.

The trailers that we use are manufactured by Bikes At Work. This is a special model developed in joint collaboration between Bikes at Work and Déménagement Myette. This is in fact the 64AW model but with the wheels doubled and the internal width increased to 30.25” to be able to fit standard appliances. A few modifications were also made to strengthen the frame and the trailer’s axle, as the 64AW’s load capacity of 300 pounds was increased to 600 pounds by doubling the wheels. Having two wheels on each side also has other advantages: 1) the rolling resistance is decreased because the tires are less susceptible to deformation; 2) trailer stability when cornering is increased because it is wider; 3) more safety in case of a flat tire. We also added a few safety accessories to our trailers: flags, reflectors and lights.

Be careful with the positioning of the axle, particularly if you use a long trailer such as Bikes at Work’s 96A. A very frequent error is placing the axle at the very back of the trailer, which greatly increases the weight supported by the bike and makes riding it difficult. Unless you are carrying very light loads of over two meters in length, which is not usually the case when moving, the axle should be positioned slightly behind the center of the trailer.

The choice of the bike essentially depends on the load it will have to pull. For loads weighing hundreds of pounds, a mountain bike with hydraulic disk brakes is the way to go. It is imperative to use the best braking system available on the market for bike moves, all the more so because the trailers themselves have no brakes. Although mechanical disk brakes (with a cable) provide acceptable braking power, they very quickly become disadjusted when they are subjected to heavy loads, which is not the case with hydraulic disks brakes. We have put many brands and models of bikes to the test, and our favourite to date is Devinci’s Cameleon 4.

To reduce energy loss, use slick tires, and if you have a suspension fork bike (as is the case in practically all mountain bikes manufactured nowadays), make sure that it has a lock-out to permit blocking. We think that 26” by 1.5”, slick tires are optimal; thinner tires offer even less rolling resistance but are also less efficient when braking. You may also want to install anti-puncture tire liners, be they Mr. Tuffy brand or another.

In order to be able to haul hundreds of pounds, it is crucial to have the smallest possible gear ratios, particularly when going uphill. Most mountain bikes come with an 11-32 cassette, which we replace with an 11-34 cassette (6% gain). We also replace the small 22-tooth chainring with a Mountain Tamer Triple adapter with an 18-tooth chainring (18% gain). As the Mountain Tamer was conceived in the 80s, to install it we had to replace the original crankset with an old standard, the 5 bolt crank (110/74 BCD). Such cranksets can be found used on eBay or new at Harris Cyclery. For optimal pedaling, we recommend the use of clip-in pedals, but on one side only, for practical reasons.

An electric engine might be an interesting extra, but it is not necessary. None of our bikes has such help, because we wish to show through our work just how much bikes are a marvel of efficiency.

Here is the list of accessories that we use. You can get many of these in hardware stores (such as Canadian Tire, in Canada) but some can only be found in transportation and handling specialty suppliers (ex. Doverco, in Montreal).

Handling of Furniture and Appliances

This is the most demanding and dangerous part of any move. Be accordingly watchful at all times. To avoid back injuries, learn how to lift loads safely. 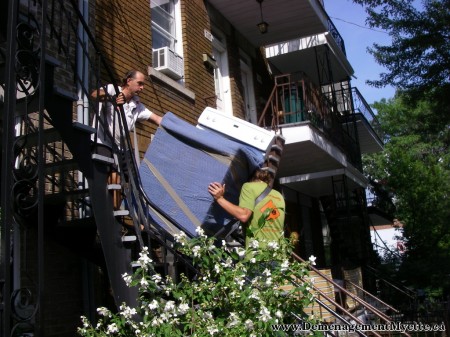 The following are typical loads. Consult our photo album for further examples. 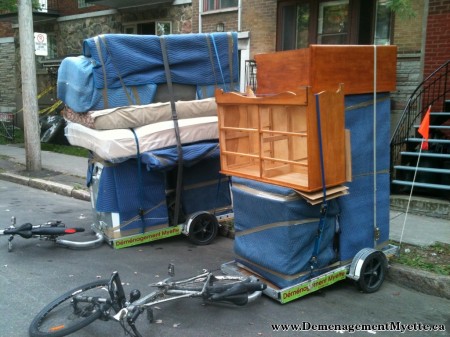 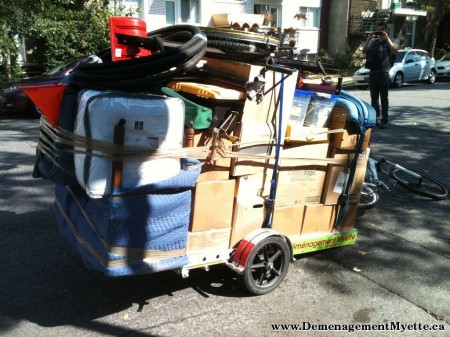 Transportation on the Road

The heavier the load, the more resistant it becomes to changes in speed and direction. Adjust your speed accordingly to the load, traffic, topography and road conditions in order to be able to quickly come to a stop in case of emergency. 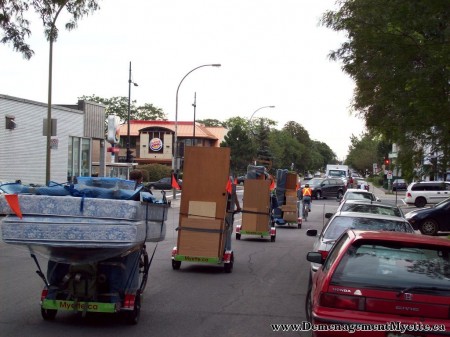